April 12, 2011
This post was originally published on April 6, 2011 as a featured article for Autism Awareness at Moms LA.
April is Autism Awareness month, and it’s been amazing to see the amount of awareness that there is today. Autism Speaks has been heading up this campaign, and I must say they have done a super job of spreading the word. They helped shine a light on autism by ‘Lighting it Blue’ on over 1,000 buildings around the world. I’ve been inundated with autism awareness on my Facebook page by some of my favorite Facebook friends (and they know who they are!). I’m a huge LA Clippers fan, and the announcers even talked about autism during the game on April 2nd against the Oklahoma Thunder. The Clips won too. Chalk that one up to autism empowerment!
When my son was first diagnosed in 1997, I was anything but aware. Jacob’s behaviors were challenging, but he wasn’t anything like the character in Rainman. Jacob could talk.  He played with other kids. He could be a handful, but nothing about his development really alarmed me. His pediatrician didn’t even pick up on anything. I was the first person I knew to have a child diagnosed with autism, so it was a new world that I was entering. When it happened, I didn’t know other parents that I could ask questions or people to go to for support. 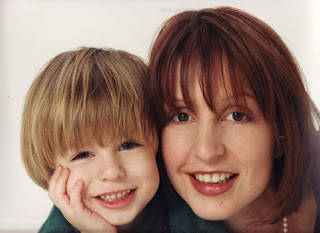 This picture was taken right before Jacob was diagnosed.
In the 15 years since I heard the words “Your son has autism”, I’ve been aware of autism each and every day. There never has been a moment when I’ve not been aware. It’s the same for every family that is touched by autism. For us, autism awareness is a constant state of being, something we wake up to every morning and go to sleep with every night.
It’s great that the Empire State Building was lit up blue for autism. In terms of awareness, it was great to hear Ralph Lawler mention during the Clipper’s game that the rate of autism is one out of 110 individuals. I am happy that I’ve made so many nice friends on Facebook from my involvement of the autism community. This is all good stuff.
But to be aware of autism, to really know it’s effects, that’s something you have to experience firsthand. For every parent of every child with autism, we’re not just aware, we live it.
Yes, I have been aware of autism every day for the last 13 years. And for every parent of every child with autism, they are never not-aware.
For parents like us, it’s Autism Awareness every day of every month, 365 days of every year

Popular posts from this blog

March 19, 2013
Raising a child is challenging, special needs or not.  Throw in difficulties with sensory integration, executive functioning, and social thinking and those challenges can at times seem insurmountable.  I remember there were days when I could hardly wait until Jacob went to sleep so I relax and collapse on the sofa.  The end of the day just couldn't come soon enough. So is it any wonder that we as parents with children with autism forget that there is life beyond autism?  We are under so much pressure to make sure things run smoothly at school, that all of the doctor and therapist appointments are kept current, and all of our bills are paid and not past due.  So for Jacob, I considered being his caregiver as my part-time job.  Besides being his mom, I was his personal assistant keeping his calendar, finding him competent service providers, setting up & facilitating play dates, and making sure everything was prepared for the next IEP. It's a lot for any parent, but i
Read more

Why Isn't Anyone Doing This?

September 07, 2013
As Jacob has now graduated from high school, he's planning for the next step in his life.  As much as he would like to find a job, have a girlfriend, and move out on his own, he has absolutely no idea on how to accomplish any of these goals. So far, I've had to support him in everything that he's doing.  I've helped him apply for SSI which he is now receiving.  I helped him register to attend a local community college and make an appointment with the DSPS counsellor.  He didn't know what classes he wanted to take, so we reviewed the class description of every class that the school offers, and I mean every single one, until we found a few that he'd like to enroll.  I helped him find an internship at a local doggie daycare, and if he does a good job, the owner might consider hiring him for a permanent position. So, Jacob is doing fairly well, but without my support, none of it would be happening.  While I'm happy to help, the entire experience shows me
Read more

Thinking About the Past and Hoping for the Future

October 24, 2013
Last year, this article was published in the on-line content of Johns Hopkins University Press "Narative Inquiry in Bioethics Project Muse".    Here is it in its entirety. As Jacob’s mother, I made it a priority to make sure Jacob always had what he needed.  Today, the result is a Jacob representing over 15 years worth of love, patience and so many supports, services, and therapies that I can’t quite remember them all.  He’s a confident young adult.  He attends public high school and is on track to graduate with his class next spring.  He has a part-time job at Best Buy through his school’s Workability program.  He has a few friends with which he frequently interacts and plans weekend stay overs at our house.  He manages all of his school work on his own with no supports from professionals or me.  He even advocates for himself at his annual IEP.  By most accounts, Jacob is a success. While I know that the combination of all the professional services that Jacob received h
Read more